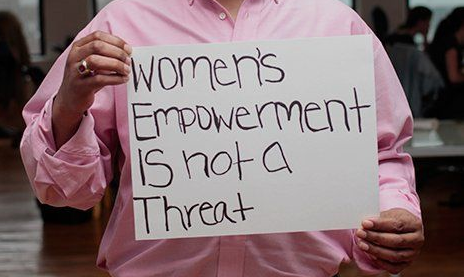 Can everyone who supports the idea of women’s rights call themselves a feminist, or are there other criteria that have to be met before people are allowed to sport the label? Like  having experience of life as a female and all the attendant discriminations that that brings? Can men ever really be feminist, or should pro-feminist men be consigned to the sidelines, welcome allies in the struggle for gender equality, but disqualified from full membership by their privileged position as fully paid up members of the male fraternity?

Any movement for social justice would be doing itself no favors if it deliberately excludes its own supporters from the ranks, but while many feminists welcome men’s championship of the cause, there’s still a great deal of debate over their entitlement to call themselves feminists. The argument rages even amongst pro-feminist men, with some arguing that gender should be no barrier to full and active participation, and others arguing that as feminism is rooted in the women’s liberation movement, a movement founded by women for the advancement of women, men have no right to lay claim to the tag.

It goes without saying that men’s participation in gender justice movements could strengthen feminist efforts. Some forms of participation could include taking action online to defend women’s rights; supporting national and local campaigns opposing violence against women; raising awareness about sexism, for example in local sports teams or music venues; educating young people in schools and universities; and joining organizations working for gender justice. In particular, men can play an important role in challenging other men over their sexism, misogyny, and violence by calling it out, supporting victims, or bearing witness.

Despite the above arguments, there remains a concern among women and women’s organizations about men’s involvement. Some fear that attempts to engage men will distract from the primary task of empowering women, or that ‘men will take over’ women-led actions and campaigns.

Join us as we continue the conversation “Why every man should be feminist” on our YouTube channel.

Why every man should be feminist

How to build your self confidence
Scroll to top